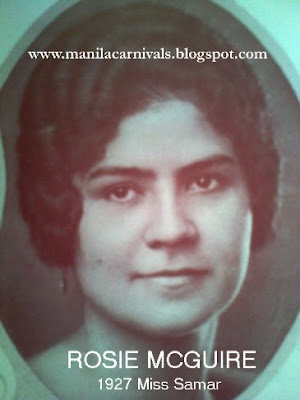 SAMAR'S SWEETHEART. Rosie McGuire, the first and only known Miss samar to represent her island province at the 1927 edition of the Manila Carnival.

The American Mcguires settled in Borongan, Eastern Samar and the lovely Rosie McGuire could very well be from this landed family. Don James McGuire was a prominent citizen of the place, and his magnificent McGuire Bldg., built in 1931, still stands restored in Borongan. A McGuire St. can be found in this town, (now a city, and capital of the province). Other than that, not much is known about this fair mestiza beauty, the only known Miss Samar to grace the carnival of Manila where Manila's Luisa Marasigan triumphed as Miss Philippines of 1927.
Posted by Alex D.R. Castro at 5:00 PM No comments: 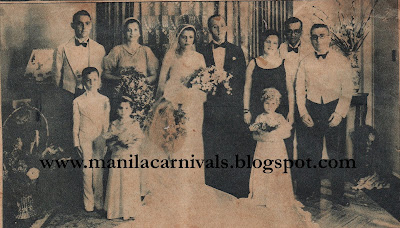 SWISS MISS. Carmen Bastida, Miss Davao 1927, ties the knot with Swiss Hans P. Anderegg in ceremonies held at the Paules Church. Photo was taken in the home of Carmen's brother in Manila. From Graphic Magazine, April 1933.

Carmen Bastida, the mestiza beauty who represented Davao in the 1927 Manila Carnival, is shown with her groom Hans P. Anderegg, after their nuptials at the Paules Church in Manila on 17 April 1933.  From left to right are: Anton Alsobrook (best man); Blanquita Danon (maid of honor); the bride, Carmen Bastida; the groom Hans Anderegg; Mrs. Manuel N. Tuason (sponsor); Isidro Bastida, the birde's brother who gave her in marriage; and Dr. Manuel N. Tuason. The children are, from L to R: Manuel Tuason Jr., Rosemarie Tuason and Chiquita Ortigas. Paul A. Meyer Sr., one of the sponsors, does not appear with the group. The couple, who are popular members of the cosmopolitan community of Manila, sailed for Switzerland, the groom's homeland, on a honeymoon tour that lasted 6 months.
Posted by Alex D.R. Castro at 4:34 PM No comments:

THE SECOND MISS MINDANAO 1939. Nieva Erana, a popular Escolarina student, is credited in extant Carnival photos as the other Miss Mindanao, together with Adela Planas.


Adela Planas was in the court of Iluminada Tuason, Miss Philippines of 1939, as Miss Mindanao; in fact, Adela was with the rest of the winners during Iluminada’s coronation night.

But we have visual documentation of another Miss Mindanao, who was accorded that honor but who politely declined it.

She is no other than Nieva Paz Eraña, who, four years before had previously reigned as Queen of the Students’ Night during the festivities at Centro Escolar de Señoritas from Jan. 18-21, 1935.

Shortly after the Carnival, she married Major Jaime Velasquez of the Philippine Armed Forces. He was also Quezon's aide-de-camp during the war; later he worked for the Ayalas in developing Makati--so now a a park and a street is named after him in Salcedo Village). Their 1938 marriage was short-lived. Nieva contracted malaria during her pregnancy, but sadly the passed away during childbirth in 1940. The baby boy she managed to deliver tragically passed away too, after 3 days.  Nieva is interred at the North Cemetery.
Posted by Alex D.R. Castro at 5:58 PM No comments: