CARMEN OF CAGAYAN. The first Miss Cagayan ever to compete in the Miss Philippines search of the Manila Carnival, Carmen Quintos, who reigned in 1927.

Cagayan held its own provincial fair in 1926, but it was not until a year later that it sent its first beauty delegate to the 2nd National Beauty Contest of the 1927 Manila Carnival.

That honor went to education student Carmen Quinto from Aparri, Cagayan. She, however, failed to land in the winners' circle, with Miss Manila, Luisa Marasigan topping the beauty tilt.
Posted by Alex D.R. Castro at 5:52 PM No comments:

The second Miss La Union to join the Miss Philippines tilt of 1927, was the comely Corazon Campos, who succeeded Manuela Ortega. The Camposes, from Bauang, are also related to the political Ortega clan.

The crown was won by Miss Manila, Luisa Marasigan, who was actually from Tayabas, but based in Manila as a colegiala.
Posted by Alex D.R. Castro at 5:04 PM No comments: 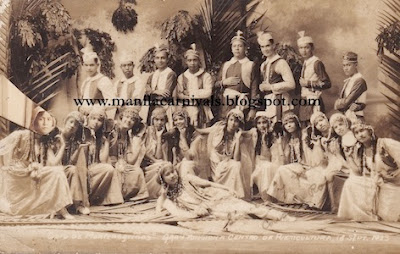 ZAMBOANGA CARNIVAL, 1923. A group of performers from the Center of Agriculture.

The throngs of people who flocked to the Carnival were treated every night with all sorts of spectacular entertainment—danzas (dances), themed balls, music, circus acts and acrobatics. There were just too many nights to fill over a period of two weeks—the 1908 Carnival alone featured three balls that were livened up with regional dances performed right at their national pavilions with their respective flags.

The best performing groups (comparsas) were recruited by the provincial organizers to provide musical entertainment and dance interludes. Scouring the schools for the best dance and drama groups, the chosen performers were carted off to Manila to show off their terpsichorean talents to the delight of the Carnival crowd. They often aligned their performances with the visual theme of the Carnival—Hindu-Arabic, Grecian, Russian, Fantasy, Filipiniana. 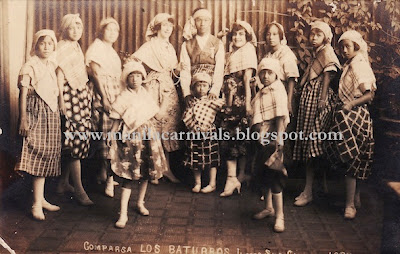 Folk dances were staged on the ballroom in the center of the Hippodrome—measuring 300 ft. x 100 ft. The capacious dance floor was outfitted with first class wood made “to shine like crystal”. The enclosed area was defined by a wall with mural paintings done by the artist Robert McGreer and illuminated with electric bulbs. 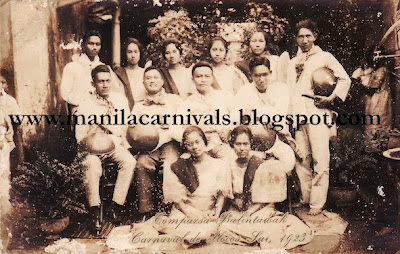 The production numbers grew more elaborate as the years passed; in 1929, during the reign of Pacita delos Reyes, aside from the Comparsas Night, there was a separate tribute prepared by her proud university called University of the Philippines Night, in which students rose to the occasion to stage “Pageant of Agriculture”, memorable for its scenario written by Carlos P. Romulo and its music supplied by the U.P. Conservatory of Music.

The entire university gave its all-out support and student earned P.E. credits for their participation in the evening spectacle. In no time at all, provincial carnivals were including performances by local comparsas, and a few of their productions are captured in these vintage souvenir photo postcards from the said events. 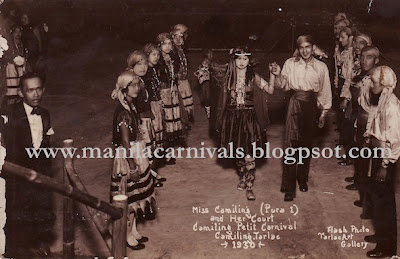